COMBAVA is a project funded by the European Union and led by Globice-Reunion, aiming to use passive acoustic monitoring to provide further insights on humpback whale movement connectivity within the western Indian Ocean. It is based on a strong regional collaboration and the engagement of several partners including IHSM, Cetamada, Zavora Marine lab, Watamu Marine Association, Parc National Marin Mayotte, CetRec, Shanan Atkins, Gill Braulik and Salvatore Cerchio.

Despite the covid-19 pandemic context, strong mobilization and engagement of the project partners allowed the deployment of acoustic recorders in most of the study sites during the 2020 austral winter. Ten SoundTrap recorders were successfully deployed throughout the south-western Indian Ocean breeding ground: in the coastal waters of Reunion, Madagascar (including Saint Marie, Nosy Be, Toliara, Mahajanga), Kenya, Tanzania, and Mozambique.  In addition, a SoundTrap was also deployed in western Australia, to assess possible connectivity with the eastern part of the Indian Ocean basin. Logistics were difficult due to the pandemic and resulted in the late deployment of the recorders in some areas, such as off Kenya and South Africa in September. Other technical problems were encountered resulting in missing data in Tanzania. This overall effort resulted in several thousand hours of recordings that will be analyzed in the coming year to investigate the temporal distribution of humpback whales at different sites and possible inter-annual variation in occurrence and migratory timing.  Furthermore, the structure of humpback whale songs will be analyzed in detail to assess regional variation and connectivity between the different sub-regions. Diffusion of song from one year to the other will also be investigated, based on recordings collected in previous years under a former project named EtCetRA (Etude des Cétacés de la Réunion et Actions régionales).

The primary results of this study were recently presented online at the African Bioacoustic Community Conference in November 2020. Watch it here ! 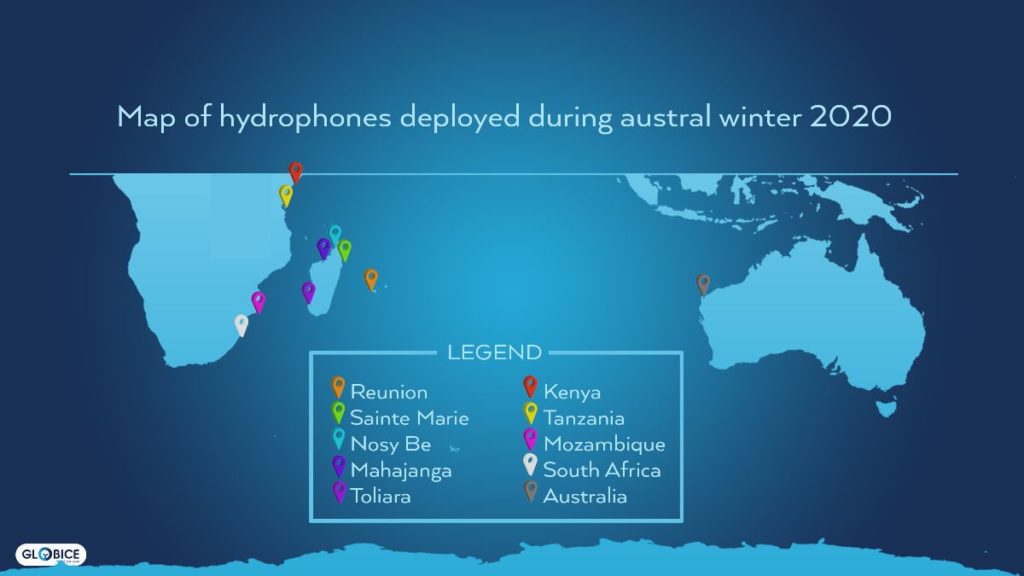