On 26 August, the mass stranding and deaths of a number of melon-headed whales (Peponocephala electra) were reported at several places around Grand Sable, on the south-east coast of Mauritius Island. Local pleasure craft operators and fishers immediately organised themselves and worked together with officers from the Albion Fisheries Research Centre (AFRC) and the National Coast Guard (NCG), trying to help the remaining pods to regain open water. Representatives from two NGOs, the Marine Megafauna Conservation Organisation Mauritius (MMCO) and Mauritius Marine Conservation Society (MMCS), as well as Drop of Blue Ltd assisted the necropsies as observers, taking photos and notes.   A short video of the event and the associated response is available here.

Members of the international community, namely the Expert Advisory Group for Strandings of the International Whaling Commission (IWC), together with scientists and vets from the IndoCet network assisted local responders via WhatsApp, including providing real-time guidance on necropsy procedures and how to herd groups of animals seemingly ‘trapped’ inside the coastal lagoon out to sea. Besides almost daily meetings between stakeholders in Mauritius on dealing with the situation, numerous virtual meetings with international experts facilitated a process on finding the best possible solution and a way forward. Efforts to herd animals out of the lagoon continued until the 4th of September.
Until 14 September, 53 individuals of two species have been found dead; these comprise 52 melon-headed whales and a single bottlenose dolphin (Tursiops sp.).

During a parliamentary debate of the Seventh National Assembly of the Republic of Mauritius on 3. November 2020, the Minister of Blue Economy, Marine Resources, Fisheries and Shipping indicated that in order to identify the causes of the death of the marine mammals, his Ministry sought the assistance of the Livestock and Veterinary Division of the Ministry of Agro-Industry and Food Security to carry out necropsies on the carcasses (Republic of Mauritius, 2020). 26 necropsies were performed between 26 August and 4 September 2020 and findings from the necropsies showed lacerations, broken jaw bones, large bite wounds, empty stomachs, congested and emphysematous lungs, acoustic fat haemorrhage and gas embolism to be the most common lesions. The interpretation of the results by the Veterinary Services indicated that the main cause of the death of the melon-headed whales was barotrauma, that is, the physical damage to body tissues caused by a difference in pressure. This could have been triggered by a multitude of factors, such as navy sonar, oil industry airguns, undersea earthquakes, and volcanic eruptions. Swabs and samples of the liver, lung, stomach content, kidney, skin, blood, melon, spleen, adrenal gland, intestine were taken from the body parts of 19 melon-headed whales and one bottlenose dolphin and were sent to the Forensic Science Laboratory for further toxicological and aliphatic hydrocarbon residues analysis by the Veterinary Services. The toxicological screening yielded negative results for all the samples, whereas aliphatic hydrocarbon was detected in samples from 11 whales. One carcass of a melon-headed whale found in Poudre d’Or was in a necrosed and eviscerated state, and its death was attributed to septicaemia and hypovolemic shock.

The report from the Forensic Science Laboratory (FSL) has not been made public. Although the event occurred a few weeks after the grounding of the bulk carrier ‘Wakashio’ on the same coast, which resulted in an oil spill in the area, the exact cause of the strandings has not yet been determined. This will require the analyses of the samples collected and a full investigation of different potential causes.
Incidentally, a stranding event also involving melon-headed whales was reported in March 2005 in the same area when approximately some 70 individuals stranded in the lagoon of Bois des Amourettes and Bambous Virieux on the southeast coast of the island. Out of the 70 whales, 35 died in the lagoon. Other groups (estimated to be 80-100 dolphins) were apparently trapped in the lagoon in the area at the same time, unable to find their way back out to sea. The organised herding operation was successful and after a few days, the animals left the lagoon.

Events like this highlight the value of a regional stranding network such as the one being established under IndoCet for several reasons: it enables connectedness and information flow between partners of the regional stranding network (for example, in this case colleagues from close-by Reunion Island being able to assist Mauritian colleagues) and also facilitates a greater exchange and information flow as well as support from international experts, like the IWC’s expert advisory group. Emphasising the regional collaboration of a network, for example through the report submitted to the International Whaling Commission last year (Plön et al., 2019) that many IndoCet members contributed data to, is a first step to further point out the efforts in the region and thus facilitate additional training and possibly research funding for partners of the network.
The report is currently being turned into a publication with the aim to explore potential previously ‘missed’ events and explore regional patterns that may provide additional information for future stranding events. For more information please contact: stephanie.ploen@gmail.com. 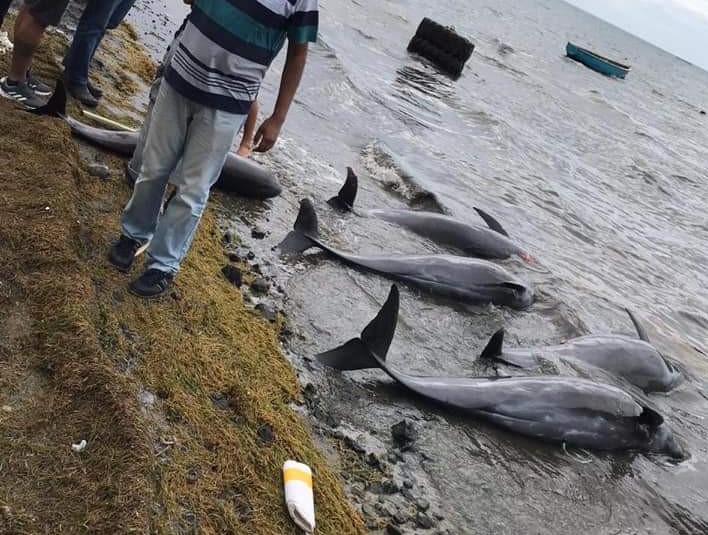