In July and October 2021, Globice, in partnership with MMCO and Drop of Blue, conducted two opportunistic large-scale surveys in the southwest Indian Ocean onboard the French fisheries patrol vessel, Osiris II (DMSOI). Visual observers from Reunion and Mauritius boarded the vessel for 3 weeks in order to monitor cetaceans and other megafauna (seabirds, turtles, …) in the offshore waters of Reunion, the Mozambique channel (Îles Éparses) and Madagascar.

A total of 168 sightings of 9 different cetacean species was made over 13,010 km of survey effort (411 hours). The main species observed was the humpback whale, with a very high concentration observed south of Madagascar in July (200 individuals sighted in one day) and relatively high numbers also reported in October in the same area (20 whales in one day). A map and article on the surveys is provided here. This was unexpected given the generally low numbers observed elsewhere in the region this year. Minke whales were also observed on three occasions. Among the toothed whales, three sightings of sperm whales were recorded and based on the size of the animals, these were all adult males. Killer whales, pygmy killer whales, beaked whales and Risso’s dolphins were also observed in the Mozambique channel, where the species diversity was highest. Pantropical spotted dolphins occurred throughout the region and spinner dolphins were reported in the shallow waters of Glorieuses, as previously reported by Globice.

It is hoped that these two surveys are the prelude to many more, and that they will allow us to initiate a long-term monitoring program in the south-western Indian Ocean, using platforms of opportunity and regional collaborations among Indocet members. 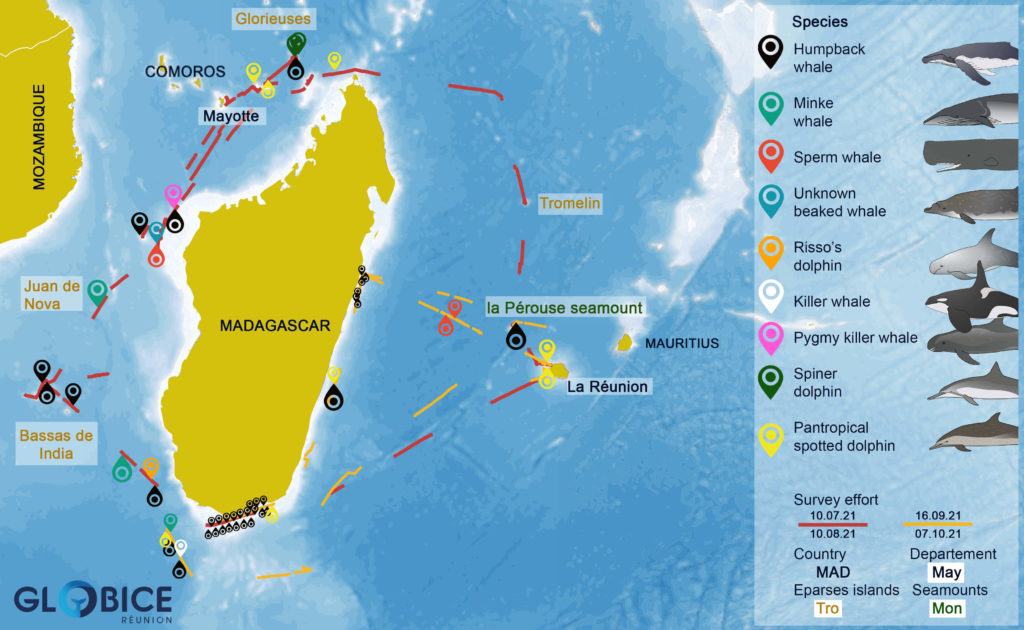 » Satellite tag program to follow southern right whales along their migration » Where are the whales - Season 2021 ?