Where were the humpback whales in 2019 ?

Humpback whale counts reported by researchers from much of the Western Indian Ocean region during the 2019 season seemed low in general when compared to prior seasons for which data were available. These were at odds with counts from Cape Vidal (South Africa) and southern Mozambique. Variation between seasons is not necessarily unusual, as evidenced by counts from Reunion, where sightings data have been collected systematically (with measurable effort) since 2004; humpback whale occurrence increased significantly in Reunion in 2007-2008, and remained relatively stable until 2014. In 2015-2016 sighting frequencies dropped to levels recorded in 2004-2006. Large increases in sighting frequencies were recorded in 2017 and 2018 but dropped again in 2019 to rates typically recorded between 2008-2014. In the East African region this variability is not as apparent and is harder to measure given a general absence of multi-year survey work. However 2019 represented a significant shift in apparent whale density.

In order to establish a regional picture of whale occurrence during the 2019 season and assess whether this trend was observed at the basin scale, some simple feedback was requested from IndoCet members and other regional researchers. They were asked to estimate the scale of change between 2018 and 2019 at their study site and to provide information on the type of data collected to assess this trend. The compiled responses are plotted in the map above as recorded or perceived percentage change between 2018 (light blue bars) and 2019 (dark blue bars).

The responses revealed that:
Although the indicators might not be accurate or methods consistent between sites, this first initiative allowed us to gather an overall image of the humpback occurence in the Western Indian Ocean. Setting up simple, standard indicators among projects in future might be useful for providing rapid assessments of seasonal and regional variations. Feedback on an IndoCet Facebook post on this matter was extensive, and there remains scope to organise a regional call to discuss further options. Suggestions would be welcome, and discussion could include consideration of a regional proposal. 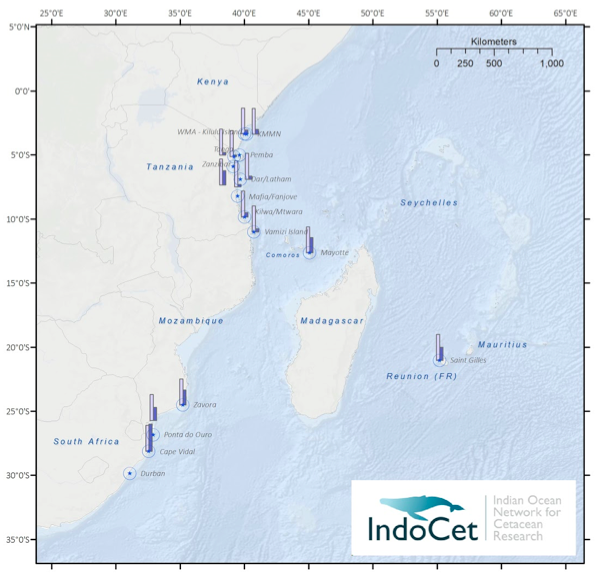